A passion can be sublimated, postponed, pushed down and neglected. But eventually it demands to be recognised. An enthusiasm for art and photography from childhood took back seat as Pamela pursued a career in advertising (in Australia and UK), then for 25 years in the entertainment industry.

Her love of both performance and visual arts, along with an ability to visualise and comprehend design and composition, played an essential role in her working life, but in her personal life, creativity continued to emerge.

Much of Pamela’s work is influenced by light, an almost life-time (she was given her first camera at the age of ten) of “seeing” through a camera lens. In her life drawing, she responds to the impact of light on the form and tonal qualities of the body’s framework. Similarly, when painting landscape, Pamela prefers to work outdoors, en plein air, to capture the daylight on the surrounding shapes and textures. 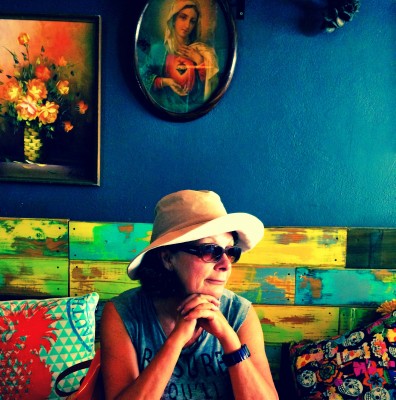 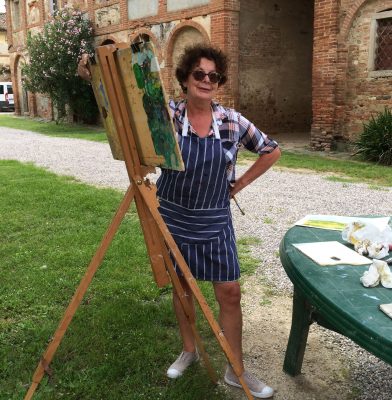 Postcards from my Palette

Chapel Off Chapel, Foyer Gallery  (25 February-15 March 2020)|
In my belief that everybody is creative, I invited the people around Stonnington City Council to paint: spontaneous, unstructured, ‘no rules’ art.  While they painted, I captured the essence of the community through my camera lens. From family birthday celebrations in the gardens, to market shoppers, dog walkers and the Principal, staff and students at Prahran High School, these wonderful collaborative outcomes comprise the “Urban-Eyes” exhibition, proving that everyone is, indeed, an artist.
(The Urban-Eyes Project was supported by a City of Stonnington Arts & Culture grant.)
Urban-Eyes media release

Chapel Off Chapel, Foyer Gallery  (1-27 October, 2019)
Stage Door is a fusion of my professional and personal passions, paying homage to my showbiz family, friends, and career in the entertainment industry. From the artist’s studio to treading the boards, this exhibition captures the rhythms of life behind the Stage Door.
Stage Door Media Release

Middle Park Bowling Club (February 2019)
In the tradition of the Village Artist, I sketched and painted with the children of our neighbourhood. The resulting exhibition represented my work and the young artists, reflecting not only their creativity, but also our contemporary lifestyle within the historic, architectural backdrop of our village, Middle Park.
(The project was supported by the City of Port Phillip Cultural Development Fund)

Wish You Were Here

Chapel Off Chapel, Foyer Gallery  (February-March 2018)
A life-long passion for roaming with her camera and sketchpad, an art history/painting workshop in Tuscany, a wedding in Portugal and a recent residency in England’s Lake District, have been the collective inspiration for Pamela’s latest exhibition – a series of “postcards from my palette”.
Media Release

Women in Love – along the Great Ocean Road

Eagles Nest Fine Art Gallery, Aireys Inlet (2016)
With new artworks, and a continued passion for life drawings, inspired by the words of classic literary authors who probed the extremities of being in love.
http://www.eaglesnestgallery.com.au

Chapel Off Chapel,  Foyer Gallery (2015)
An exhibition of life drawings, evoked by the words of literary authors who delved into the intricacies and extremes of emotions in love. Titled after D.H.Lawrence’s novel, artworks have been influenced by writers including William Shakespeare, Emily Brontë, Pierre Choderlos De Laclos and W. Somerset Maugham.
Media release