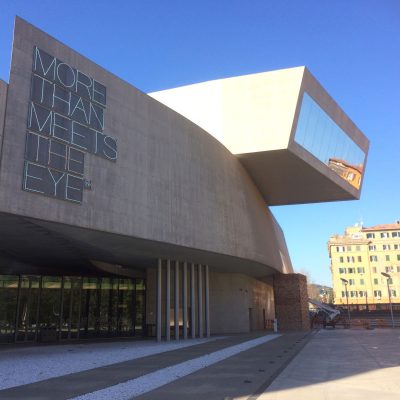 In Rome, art and history is all around you, enriched by food, shops, people-watching. It’s my favourite capital city because simply ‘being in Rome’ is more than enough happiness. But, its only on recent visits that I discovered the contemporary art home of MAXXI.

On approach, you know you’re somewhere special. The building was designed by Iraqi-British architect Dame Zaha Hadid (1950-2016). When you walk into the foyer of MAXXI your eyes are looking up and around with the realisation that those strips of light are stairways to exhibition spaces. Everywhere, you’re visually guided to the next space and the next. A bit like Charlie and the Chocolate Factory for contemporary art lovers.

Getting there: On my map, it looked straightforward. In fact, a straight line along Via Del Corso from my hotel to Piazza del Popolo, then continue on. I love walking, I love Rome,  I’ll stroll. I walked and walked briskly for well over an hour, in not the most picturesque of surroundings, each time thinking it has to be “around the next corner.”  Along the way, I was aware of the many passing trams travelling the same straight line, parallel to me.  Just where the tram (finally) curves around…there it is, MAXXI.  Afterwards, I caught the ‘straight line’ tram back to Piazza del Popolo, better informed for the next trip.  Don’t make my mistake.

Where to start with the art? All new to me (with the exception of a Gilbert & George photography exhibition on my last trip). The curation, as with the architecture, makes ‘space’ as important as the works.

Photojournalism is my favourite photographic style. Discovering Letizia Battaglia (born 1935 in Palermo, Sicily) was ‘explosive’.  Working for the left-wing newspaper L’Ora, Battaglia took around 600,000 images, focussing on the Mafia, its infiltration and assault on Sicilian life and society.   Extraordinarily, she could be at four or five murder scenes in one day.  Letizia Battaglia photographed so much death that she is quoted as saying, “Suddenly, I had an archive of blood.”

“Take a look and you’ll see, into your imagination.
We’ll begin with a spin, traveling in the world of my creation” *

And then…. I found Yona Friedman, born 1923 in Budapest (Hungary), his works defined as mobile architecture and people’s architecture.  A truly exquisite experience, his exhibition was an education, literally, as he notes philosophies for creation around the walls, e.g.
–        Mobile architecture implies trial and error process
–        It is the layman’s planning procedure
–        It starts with improvisation
–        and it continues with improvisation
–        irregular structures were conceived for the layman – the improvisator
–        they can be shaped by the hand (most of them)
–        they don’t involve exactitude of execution
–        but they can be objects of art.

Now in his mid-nineties, Yona lives in Paris, he’s still working and clearly “as bright as a button”.  I’d encourage you to have a look at his website www.yonafriedman.nl to explore his life and works.

Photos: the ‘floating’ magnificence of Yona Friedman’s people architecture; around the walls, “there are 3 pre-conditions for ‘people’s architecture’. It must be easy to assemble for a layman. It has to be an assembly of inexpensive technical components and easy to dis-assemble and re-assemble into a different pattern.”

I had a fun time “sketching like Yona”, practising his six circles make a box lesson. When I returned home to Melbourne, I started following him on Instgram  Coyly, I posted the photograph of my sketch at his MAXXI exhibition, adding @yona_friedman.  Kindly, he wrote a comment, “Thank you Pamela. How nice to see this! I love your sketch”
…..I think I’m in love, sigh! 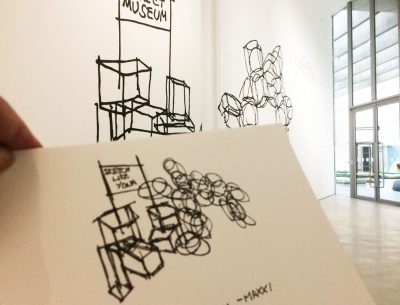 “There is no life I know, to compare with pure imagination”,  from Charlie and the Chocolate Factory.
* Songwriters: Anthony Newly, Leslie Bricusse © Universal Music Publishing 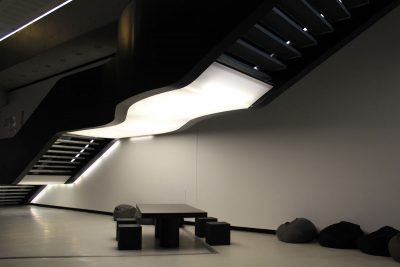