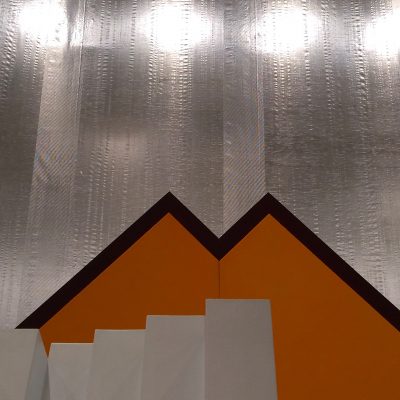 There’s a not-so-new exhibition opening at NGV Australia. It’s a reincarnation. In 1968, when the National Gallery of Victoria opened its site in St Kilda Road, Melbourne, the premiere exhibition was “The Field”, showcasing the works of 40 Australian artists influenced by American Abstract Expressionism. Contrary to ‘usual’, these works were bold colours, strong lines, flat surfaces with hard edges and geometric shapes. Focussing on younger artists (some hadn’t previously held solo exhibitions and eighteen of the artists were under 30 years of age),  The Field was controversial, divisive, deemed “odd” and “not inclusive”, causing great aggravation for one Herald Sun art critic.

Today, the NGV opens The Field Revisited, bringing this ground-breaking exhibition back to life –  in 1968 The Field launched the careers of contemporary Australian artists including Robert Hunter, Peter Booth, Robert Jacks, Sydney Ball and Janet Dawson.

At a preview floor talk, Beckett Rozentals, NGV’s Curator of Australian Painting, Sculpture and Decorative Arts, explained the exhibition’s history and the lengthy search to locate and restore original artworks. Some had been destroyed or dismantled by artists. These have been recreated for the 2018 exhibition, housed in the ultra-modern Ian Potter Centre. To replicate an authentic ambience, the walls are floor-to-ceiling tin foil, display stands have also been rebuilt to original design.

The Field Revisited certainly took me “down memory lane”.  I vividly recall a school excursion to the NGV (then housed in the State Library of Victoria) to see  “Two Decades of American Painting”, 1967 – my introduction to abstract expressionism. “Vivid” memories not only because of  “the WOW factor”, but the size of the works, large flat shapes of colour. Artworks stood alone, commanding their exhibiting space, rather than placed closely together. I also recall being uncertain about Jackson Pollock’s work.

My other recollection, triggered by all that tin foil, was of an exhibition at Tolarno Restaurant and Gallery in St. Kilda. This avant-garde gallery, alongside the restaurant, was the initiative of owners Georges Mora (art dealer and patron) and artist, Mirka Mora, who had built an entrepreneurial reputation around Melbourne with their studio and café at the top end of Collins Street (early 1950s), then later Café Balzac in East Melbourne. It was the 70s, I was Media Manager at an advertising agency, wore hot pants and body-shirts with Indian silk scarves to work. On a week day lunch break, some colleagues and I went to Tolarno Gallery. The exhibition was a dark room, all walls and ceiling were covered in tin foil with typically psychedelic coloured lighting projected onto, and moving around, the room. The floor was a white, moving ‘water bed’ like surface. We lay on the ground, watched the coloured lights reflect around the walls and ceiling, while listening to the sounds of……. farm animals. Memorable!

Photos: Loads of colours and shapes at “The Field Revisited”. I enjoy reading the “For Kids” notes e.g. third photograph is James Doolin “Artificial Landscape 67.5”.  Kids note asks “What sort of street signs did you see on your way to the Gallery today? What shapes and colours were they?”; last image Robert Rooney “Kind-hearted kitchen-garden IV”.  Kids’ note advises “This painting is based on the shape within a clothes peg!”

When photographing exhibitions, I have fun with their existence within the gallery space, often including the people who come to view them (refer my blog  www.pamelareid.biz/theres-an-art-in-people-watching). To see the artworks in their entirety:  The Field Revisited is on at NGV Australia, Federation Square, 27 April-26 August 2018, open daily 10am-5pm. https://www.ngv.vic.gov.au/exhibition/the-field-revisited 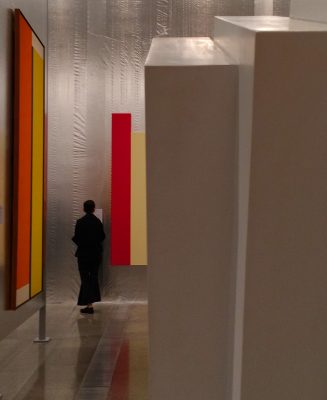 “The Field Revisited” 2018 at NGV Australia