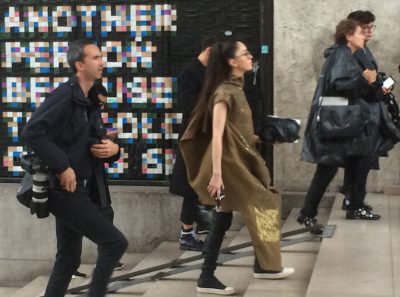 Who doesn’t love Paris (a rhetorical question)?  The city of romance, art and architectural history, fashion, people-watching. Films, books, songs, cruising the Seine, strolling the Champs Elysees, sitting on the steps of Sacre Coeur, wining and dining. Everybody loves Paris!

A recent trip with my sister was a return to Paris – we hadn’t visited together since (way back) in the Seventies. How fortunate that we arrived on, and found ourselves in the midst of, the Opening of 2017 Paris Fashion Festival at the Palais de Tokyo. So many ‘beautiful people’, paparazzi and plenty of attitude.  The very best of Bienvenue à Paris!

Usually, I commence “Art and about Europe” blogs with my morning walks.  In the city of love, Cupid rises at daybreak, his bow and arrow aimed at brides and their grooms, with the Eiffel Tower as a romantic backdrop.

Art is in abundance in Paris….the big decision for the day is where to start?  As everything ‘now’ was fashion, how exciting to see an exhibition of Irving Penn’s photography at Le Grand Palais.

It’s a short stroll, along the Seine riverside, from Le Grand Palais to the Musée d’Art Moderne, exploding with colour and contemporary art. 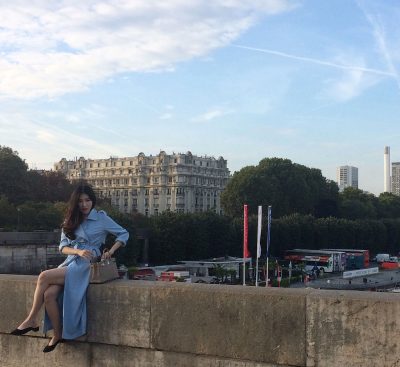 Photo:  Out and about – Paris style.

The neighbouring Le Petite Palais houses the Museum of Fine Arts. An impressive “look up” experience (built for the 1900 Universal Exhibition), it is based on a trapezium shape, made up of four wings around a semi-circular garden bordered by a richly decorated peristyle. It is a welcoming mix of traditionally elaborate and open spaces to explore.

There’s much to see when wandering Paris…..and wander we did:

Photos:  Striking sculpture by Anna Quinquaid, outside the Palais de Tokyo;  A diminutive ‘me’ outside the very grand entrance to Le Grand Palais; art instruction inside Musée d’Art Moderne, of course we cruised the Seine; night light’s in a neighbouring building.

Some “must do” totally tourists photographs:

Photos: the impact of old and new outside Le Louvre; riding The Metro; Sacre Coeur, Montmartre; the best view of Paris……..and fromage! 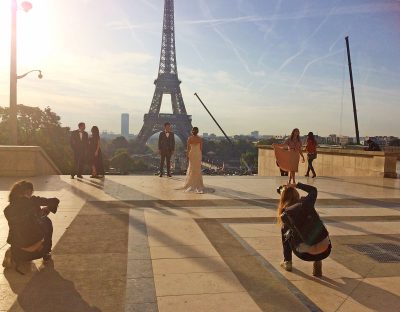 Photo: Brides and fashion photoshoots combine as dawn breaks behind the Eiffel Tower.