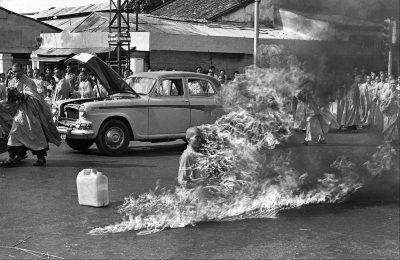 “No news picture in history has generated so much emotion around the world as that one,”  John F. Kennedy.   The photograph captures Vietnamese Mahayana Buddhist monk, Thích Quang Duc, burning himself to death in protest to the South Vietnamese Diem regime’s pro-catholic policies and discriminatory Buddhist Laws. The month before, flying the Buddhist flag had been banned, discontent rose and a mass of Buddhists protested, defying the government, flying the flag.  Government forces fired into protestors killing nine people.

On 10th June, correspondents were tipped off that something was going to happen. Malcolm Browne was one who followed this lead.  Duc arrived amongst a procession of around 350 monks and nuns. He emerged from a car along with two other monks, one placed a cushion on the road while the other opened the car boot and took out a five gallon can of petrol. Those marching formed a circle, Duc sat in the lotus position, one monk poured the petrol over his head, Duc rotated a string of wooden prayer beads and recited the words Nam mô A di đà Phật (“homage to Amitābha Buddha“), then set himself on fire.

Journalist, David Halberstam, who also witnessed the self-immolation, wrote:  “Flames were coming from a human being; his body was slowly withering and shriveling up, his head blackening and charring. In the air was the smell of burning human flesh; human beings burn surprisingly quickly. Behind me I could hear the sobbing of the Vietnamese who were now gathering. I was too shocked to cry, too confused to take notes or ask questions, too bewildered to even think… As he burned he never moved a muscle, never uttered a sound, his outward composure in sharp contrast to the wailing people around him”.

I was captivated by photojournalism from an early age, ten years old. My father had given me a Kodak Box Brownie camera and one of his friends gave me a book, “The Family of Man”. Since then, photojournalism remains my favourite form of photography. One still image, capturing a moment, not contrived or produced, an honest story, usually for telling news, but sometimes for wider purposes. Some are horrific, some inform or entertain. A truthful depiction without editorialising or misquoting. 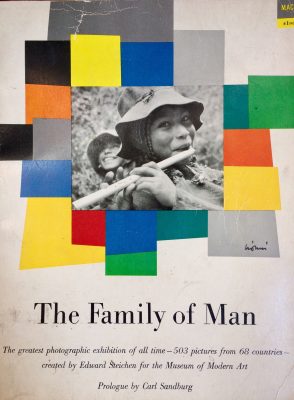 My original copy of The Family of Man 1955, described on the cover as The greatest photographic exhibition of all time – 503 pictures from 68 countries – created by Edward Steichen for the Museum of Modern Art. The exhibition was curated to depict life from birth to death, through courtships, relationships, religions, the family community from all parts of the world – the happiness, tragedy – the scale of life.  It’s not possible to quantify the number of times I’ve looked through this book. Here are just a few of the photographs that resonated with “ten year old me”.

In the 1970s, I lived in The Hague. My camera, a Pentax Spotmatic, was a constant companion. When I left Holland to return to Australia, my friends gave me the book, “The Best of LIFE”.

LIFE Magazine had been published for 36 years (1936-1972), bringing world news and events to its readers through the most memorable of photographs. In the book’s introduction, Ralph Graves, the last Managing Editor at LIFE writes, ‘Experience’ is the crucial word.  A great picture is not merely seen; it demands an emotional response. LIFE created such responses countless times for millions of readers.

Photographs:  more outstanding photography from  “The best of LIFE”
(1) Berlin, April 1945. William Vandivert.   Driven by a fierce will to live, this political prisoner was just able to squeeze his head and an arm under the door of a prison building before being killed in a fire set by his German captors. (2) Burk Uzzle.  Jill Kinmont, a ski champion almost totally paralyzed after a bad fall as a young girl. Here she seems almost triumphant in the new life she made for herself as a high school teacher in Seattle. (3) Bill Beall  – Official’s Greeting.  This picture of a helpful policeman won a Pulitzer Prize. (4) Photographer not named.  Accused in 1937 of murdering a white in Mississippi, this black man was tortured with a blow-torch and then lynched.

On my last visit to Rome, October 2017, I happily chanced upon an exhibition “Roma in Liberta” (Rome in Liberty), photographs by Rodrigo Pais, at the Museo Centrale del Risorgimento. A new discovery. 180 images assembled on the tenth anniversary of his death. While his photos tell so much about Rodrigo Pais, his observations, access to politicians, glamour, lifestyles and communities, there was no biographical information about him at the exhibition. I’ve “googled” and still can’t find anything more than his images. After digging and digging, somehow I ended up at Penélope Cruz!!  Nevertheless, here’s some of Rodrigo Pais’ photo-stories.

Photographs:  Rodrigo Pais and his camera, on the back of a motorcycle. Some of his wonderful work.

I first saw Henri Cartier-Bresson’s photography way back then in The Family of Man book. Decades later, I went to a large exhibition of his work in Brisbane.  Volumes of it, so many stages, phases, people and places – I learnt he took the last photograph of Gandhi, before his assassination.  One room after another walked us through his extraordinary “expressions”.  Glass cabinets displayed newspaper editorials with Cartier-Bresson’s accompanying photography.

While the role of the photojournalist is not to appear participative in the image, not his/her creation, it is as though Cartier-Bresson never closed his eyes. He saw everything and missed nothing, those details that tell the story, while making a perfect light/subject composition.  To me, he’s The Photo Master – Matisse with a lens (coincidently he took a portrait pic of Matisse, below).  It seems impossible to imagine that one person could leave such a legacy. But, I’ve had to make a sampling selection from my big book titled simply “Henri Cartier-Bresson Photographer”.

In a week where Assoc. Press released a photograph (credit: Jesco Denzel) of German Chancellor, Angela Merkel, leaning over the table while US President, Donald Trump, sits like a belligerent schoolboy ……this is a favourite tell-all Cartier-Bresson image. 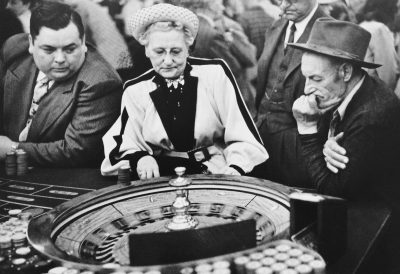