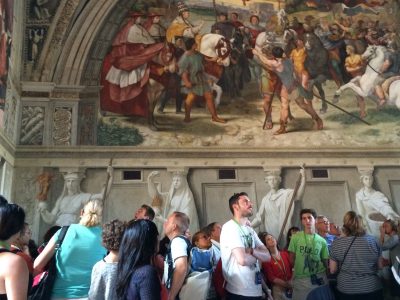 I am forever grateful to my high school art teacher, Sr. M Ursula, who taught me a great deal, including to look up. She would take us on tram trips into the city, telling us to “look up” at the buildings, the skyscapes. Don’t stay at eye level, observe the architecture, its features, how it tells the history. This lesson has been invaluable for my photographic view and in travelling, but none more so than my first day in Rome and the next…and the next, which led to return visits. My head and neck keep turning, my hands want to touch, and I can hear Sr. Ursula’s voice telling me what to “see”.

As with most of my “Art and About” blogs, I’ll start with my morning walks. So much to look up at as day breaks over the Forums, I pass the Vittorio Emanuele II Monument and head towards The Colosseum.

The Vittorio Emanuele II Monument, designed by Guiseppe Sacconi, sits at the foot of Capitoline Hill. It’s an elaborate and imposing white marble building with two contrasting dark bronze winged Victories riding chariots, looming up into the sky. Rounding the Monument, I climb the stairs to the Basilica of Santa Maria in Aracoeli, arriving at the top of Capitoline Hill.

Capitoline Hill houses the Mayor and Municipality offices. Formerly, it was sacred to Rome as a destination for victorious generals and triumphant processions. Here I greet the day, “Good morning, Rome.”

Photos: Stairs to Basilica of S.Maria in Aracoeli; daylight filters through the ballustrades, a gull perched on a guardian;
one of the statues of Roman age representing the Dioscuri, defenders of the Republican Rome; clock tower on Piazza del Campidoglio; Romulus and Remus. 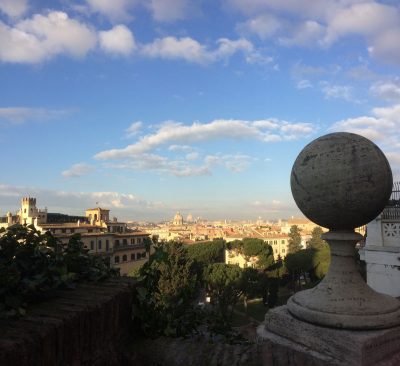 Photo: From the top of Capitoline Hill, “Buongiorno, Roma.” with love.

With such a perfect start to the day – followed by a pot of good coffee at my hotel – what to do next requires little planning, nothing more than which direction to take? In Rome, a cornucopia of visual delights, you simply step outside and wander. “Being in Rome” is enough.  (I’ll write other blogs on Rome, its art and sights, but this is mainly pictorial, about looking skywards). Typically, strolling until lunch time, or through the afternoon, “looks” like this:

Throughout Italy, nothing is more look up than standing inside a basilica or monument, awe-struck by the craftsmanship and design of domes. The Romans were the first to create these engineering marvels. I searched an engineering history site to learn about the dome in nearby The Pantheon:  “Behold! The Pantheon. One of the most amazing structures ever built. Its massive dome, weighing nearly five-thousand tons, spans 150 feet unsupported and rises almost as high in the air. The interior could house a sphere 142 feet in diameter. At the height of the dome there is an oculus, a hole nearly 30 feet in diameter, which lets in light to relieve the darkness of this massive, enclosed space.

After the fall of Roman Empire, later generations of architects would go mad trying to replicate this. A Roman could have explained it easily. Take an arch, then spin it around 360 degrees. That is a dome. Yet, even if the architects of the Middle Ages could have grasped this concept, they were missing the key element: concrete. The dome of the Pantheon was literally poured into place.”

I have a book about Piero Fornasetti, “Designer of Dreams”, an artist of decorative versatility. When thinking about writing this blog, I recalled that Fornasetti had created a series of seventeen plates, based on domes of Italian churches, as a gift for the Brenta construction company.

I’ll finish this blog with more images from The Pantheon and Vatican City, ending the day as I started it. Perfect! Sunset over The Vatican.