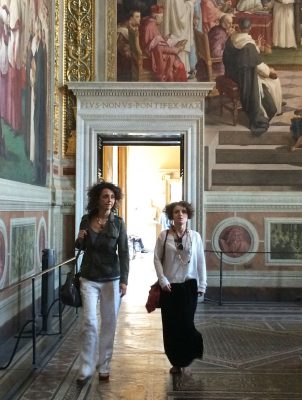 Photo:  Italian style in The Vatican

Years ago, I tore an editorial out of a women’s magazine. It was titled “Forty things to do before you die”.  Number 40 was “Sip coffee in Rome”.  I’d never been to Rome and held onto this press cutting until, finally, I did just that. I sipped coffee in Rome.  Until then, Paris to me was the beautiful European city with a reputation for sitting in cafes, people watching.  But Rome!  This is the city for walking and watching.  The coffee is good (of course, it’s Italy), but strolling those streets day and night, exploring the sights and watching the people, capturing those moments through my camera lens –  this for me is now Number One on my itinerary each time I travel.

Walking Rome: It doesn’t matter where you start, this way or that? I have ‘my’ regular Hotel on Via Del Corso. When I turn right for my morning walk, there’s few people out at daybreak, but those who are sharing the experience are like-minded. The early-risers.

Photos:  Towards The Colosseum; vegetables are delivered to a restaurant; off to work (my photo homage to Jeffrey Smart); local cafe.

If I turn left, I can stroll shopping galore until I reach Piazza del Popolo, a large, symmetrical piazza, with its central obelisk and magnificent architectural surrounds.  The church of Santa Maria del Popolo (built 11th century, then reconstructed in the early Renaissance) is adorned with artworks including: two by Caravaggio, Saul on the road to Damascus and Crucifixion of St Peter; Adoration of the Child by Pinturicchio who also painted the ceiling and frescoes within the church. The Chigi chapel was designed by Raphael…and so much more. Piazza del Popolo is also popular for people watching.

I googled the definition of “people watching” – the action or practice of spending time idly observing people in a public place.  Idle?  I don’t think so!  My late, dear friend, photographer Rennie Ellis, built a creative career and lifestyle from observation, recording social, photographic commentary. Nineteen books of his works since the Seventies have been published, including three posthumously. There have been many “Rennie” exhibitions over the years in Sydney, Canberra, around Melbourne as well as “Everyday People” at State Library of Victoria and the upcoming
https://www.slv.vic.gov.au/whats-on/strike-pose,opening next week. I worked for Rennie for three years and learnt much from him.   Back to…. The absolute pleasure and excitement in people watching around Rome.

Photos:  Trading on Ponte Garibaldi; Policeman on duty; tourists around the Trevi Fountain and Piazza Navona.

This is one of my favourite photos, taken outside restaurant Prosciutteria Coronari.  For me, it depicts this leisurely pursuit. 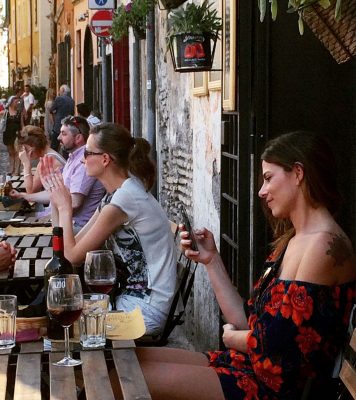 …and some around Vatican City.

Photos:  Family outing; Nuns in the neighbourhood; a beggar woman on steps just outside the city; mucho Il Papa merchandise.

Rome is also the reason for foodie fotos.  When you’re sitting in your favourite piazza, with that glass of prosecco or spritz, a small bowl of olives, a salad, the oil and vinegar bottles on the table – you’re “in heaven” and life doesn’t get any better.

Photos:  Happiness is….. with daughter, Annie.

All of this, and that’s just the daytime. When the sun goes down, continue walking, watching, dining. Experience Rome.

Photos:  Around The Pantheon; complimentary cold tomato and oregano soup at Babette Restaurant; Vivaldi’s “Le Quattro Stagioni” recital in Church of All Saints; looking out from Castel Sant’Angelo. 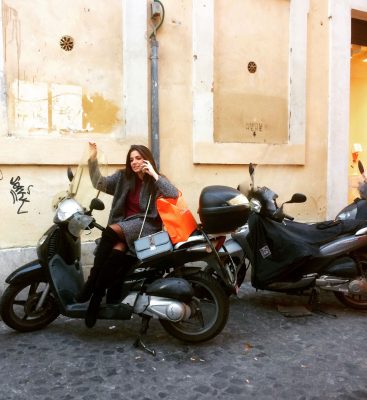 Photos:  Along via del Corso