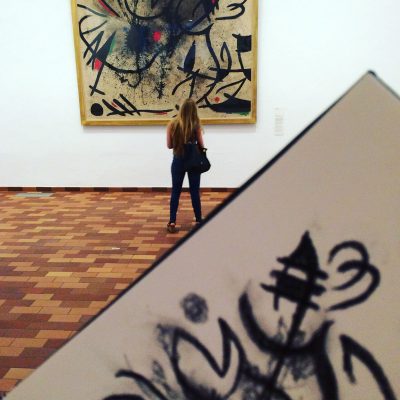 I wrote about the Barcelona sights and particularly, Gaudí, in earlier blogs. Barcelona has everything on offer to see, touch, taste and dance to.  This time I’m writing about some of my visual arts experiences.

Hopping on my city tourism favourite, the on-off bus, I headed out through the gardens to the Fundació Joan Miró. Created by Miró and opened in 1975, the museum houses his works as well as other ‘out there’ contemporary art.

Joan Miró i Ferrà was born in Barcelona April 20, 1893, growing up in the Gothic quarter (he passed away on Christmas Day, 1983, in Mallorca).  After his 1918 solo exhibition in his home city, Miró settled in Paris. While he moved amongst The Surrealists and their influences, Miró’s style – if it can be defined – is more one of ‘experimentation’ in shapes, space and abstract objects, across various mediums and textures, in a palette of bright, bold colours.  Most of what Miró created isn’t really identifiable or recognisable, which is what makes it so appealing.

While it wouldn’t be considered an artistic critique, the quirkiness of Miró makes me happy. https://www.fmirobcn.org/en

A visit to the Pablo Picasso museum in Barcelona is on every ‘to see’ list. I was a little disappointed as it displays mostly his early works. While it’s fascinating to see an artist’s developmental stages, I was expecting to see “in the flesh”  his later works, or some that I may be familiar with. (Taking photographs is not permitted).

On leaving the Picasso museum, however, I chanced upon MEAM (Museu Europeu D’Art Modern) Carrer Barra de Ferro 5, a beautiful palace rebuilt in 1792 by a wealthy textile merchant, Gomis. During the Napoleonic invasion, Marshal Lecchi, who commanded the French troops, used the palace as his regular residence. In 2011, the MEAM opened, under the sponsorship of the “Foundation for the Arts and Artists”, created in 2005 to promote figurative artists. What a treat! Moving from room to room, peeping into salons, the ground floor space exhibited splendid nude works by Spanish sculptor Josep Clarà (1878-1958).

So beautifully curated…. these sculptures speak more than any words.

MEAM also has evening programs of flamenco dance and Catalan, classical as well a jazz music. I returned on a Friday night, with newly made Australian friends, for an intimate jazz concert in one of the salons. https://www.meam.es/en 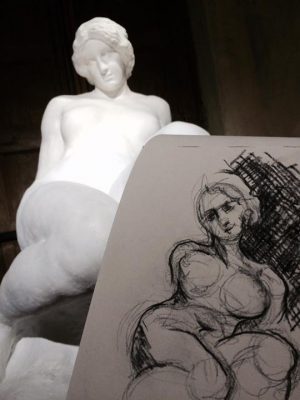 Sketching in MEAM – lucky me!

Over at MACBA (Museu d’Art Contemporani de Barcelona), it was multi-media, contemporary art of another kind – “Punk” – defined by MACBA as “Punk appeared as an explosion in the mid-seventies. Musicians, artists, designer, activists and desperate youngsters raged against the economic crisis, the end of the hippie dream, unemployment, the lack of future. Anger, speed, noise, incorrectness, opposition and provocation have defined ‘punk’ beyond the stereotypes of studs, leather and spiky hair.

Punk is an attitude with echoes of other violent, angry and irrepressible movements such as Dada and Situationism. It has survived to this day as one of the most influential cultural references of the 20th century.”     http://www.macba.cat/en

In a separate space, across from MACBA, there was another esoteric exhibition. I didn’t quite understand it, but nevertheless enjoyed the experience. Skateboards made from focaccia bread and a mechanical heart pumping away in an illuminated cross. This is surely the energy that makes art so much fun!

Have the best time in Barcelona.  I did! 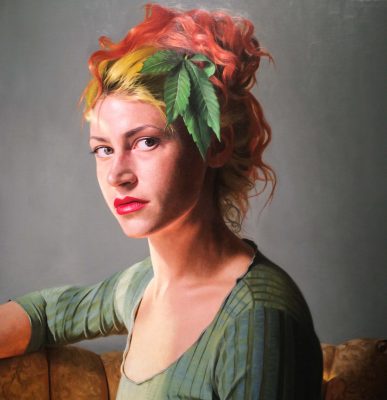