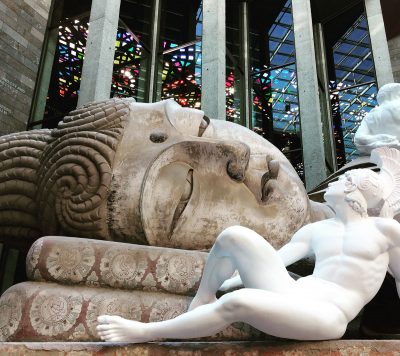 It’s my daughter, Annie, and her husband Sam’s first wedding anniversary. The gift for this occasion is ‘paper’, a symbol of the strength that comes from the interlaced connection of paper’s individual threads. How fortuitous then, that the National Gallery of Victoria has an exhibition by Louise Paramor, “Palace of the Republic” – wonderful vibrant paper sculptures, along with a room of her colourful plastic assemblages.   A smart lunch,  followed by a day at NGV Australia, was the perfect Anniversary gift.

The much larger-than-life paper sculptures are new works using the ‘honeycomb’ technique which the artist learnt during a one-year residency in Berlin, 1999. The plastic assemblages are constructed from found objects.  There’s fun in identifying all those bits’n’pieces, the building blocks of each sculpture.

Photos: Annie and Sam, “Palace of the Republic” by Louise Paramor. Exhibition is on at NGV Australia until 12 March, 2018.

There’s always room to roam around the contemporary space of NGV Australia. Currently, when you enter the foyer, you immerse yourself in “Spirit and Memory” by Japanese born Akio Makigawa (1948-1999). He moved to Australia in 1974. Described as ‘Zen-like’ (they are), his sculptures are constructed from primary materials, including stone, steel and wood. Makigawa’s works are presented on each floor, they call your attention as you arrive by escalator.  A beautiful sight!

Photos: “Spirit and Memory” by Akio Makigawa. Exhibition is on at NGV Australia until February 2018.

A powerful video installation by Mel O’Callaghan,  “Ensemble”, is at NGV Australia until 12 March, 2018.  Australian, Paris-based, Mel’s work explores human behaviours in relation to ideas of resistance and endurance.  “Ensemble” is a two-channel work depicting three firemen turning the hose on a man who pushes forward against its force. Previously Ensemble 2013 was shown at the Centre Pompidou, in both Paris and Malaga, and the Institut d’Art Contemporain Villeurbanne/ Rhône-Alpes in Lyon, France in 2016. NGV Australia has acquired this work.

Across the road at NGV International, the inaugural NGV Triennial has just opened. This massive exhibit features work of over 100 artists and designers from 32 countries, a “festival” of contemporary art/design, presented across technology, architecture, animation, performance, film, painting, drawing, fashion, tapestry and sculpture.
https://www.ngv.vic.gov.au/exhibition/ngv-triennial

It was coincidental that I had booked to attend an evening forum in conjunction with the opening of the NGV Triennial. Hosted by Matt Anderson, International Culture Editor of New York Times, the topic was “Are Artists and Designers Agents of Change?”. Speakers were six of the artists/designers whose work is showcased at the Triennial: Alexandra Kehayoglou, Brodie Neill, Josephine Meckseper, Richard Mosse, Simone Farresin (Formafanstasma) and Elliat Rich. They each gave insight to their purpose and outcomes.

The forum was after gallery hours, which meant exhibition spaces were closed, but it did give us the opportunity to peek at those works around the immediate foyer/ground NGV level.  There’s an explosion of impact as soon as you step inside: Chinese artist, Yu Zhen’s, “Eternity Buddha in Nirvana”, its more than 14 metres in length, a reclining figure surrounded by replicas of Greco-Roman, Renaissance and Neoclassical sculptures – the Dying Gaul, Farnese Hercules, Night, Day, Sartyr and Bacchante, Funerary Genius, Achilles, Persian Soldier Fighting, Dancing Faun, Crouching Aphrodite, Narcisse Couché, Othryades the Spartan Dying, the Fall of Icarus, A River, Milo of Croton.

For Japanese style and sparkle, there’s the Nendo exhibition of fifty chairs. Each Manga-inspired chair plays with the element of design and line.

There’s so much to see.  Thankfully its on until April, with a summer nights program (19-28 January, 6pm-midnight) that includes a food fest presented by Supernormal Natsu as well as the Moroccan café.  Plenty of opportunities and times to enjoy all aspects of NGV Triennial. 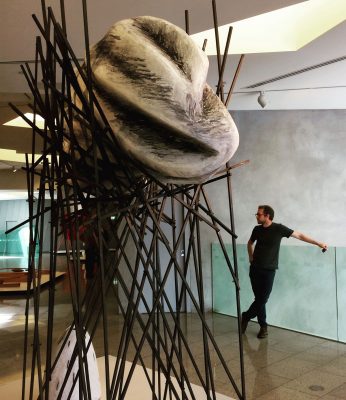