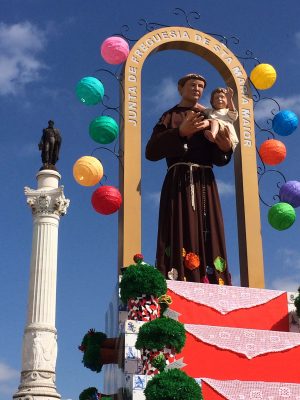 Call it a festival, call it alive, Lisbon parties! We arrived during the Festival of St Anthony, the patron saint of Lisbon. While St Anthony was acknowledged for his understanding of scripture, devotion to the poor and sick, in my home he was better known as the patron saint of lost things. My Mother was always saying ‘a prayer to St Anthony’ whenever she couldn’t find something or remember where she put it!

“We” on this trip is my friend Emilie from Holland, who now lives in Spain with her English husband, Richard, and their Jack Russell, Cooper. We stayed in Alfama, the old quarter, with its winding streets and variety of dining experiences. There are constant reminders – and ongoing building repair work – of the devastation of the 1755 earthquake which struck on All Saints Day (1st November) when the majority of the citizens were at Church. The tremors shook lit candles, resulting in fires that continued burning for five davs as buildings tumbled. Two tsunamis followed, 75,000 people died in what is considered one of the worst natural disasters ever.

The three of us roamed widely around the city, including a guided walking tour which gave us a good insight to Lisbon and its history. Along the way, I learnt that Richard likes a beer! Cooper was with us constantly, always making friends and attracting attention. A highlight was Friday night Fado (Portuguese torch-song music). Those narrow streets were a throng of happy, drinking locals and tourists. We found an appropriate restaurant to experience a Fado family in song. A memorable occasion, when there was a ‘walk out’ because one family member couldn’t quite stay in tune!  Family ties were clearly put into question.

Photos: “Can we go now?”, Cooper;  Richard likes a beer; the food is good, but this serving was “just for me”!; Cooper making friends; statue of The Homeless Poet.

Photos: the Santa Justa lift, built by Gustave Eiffel (1902); with local artist Rouslam Botiev (I bought a couple of his artworks which he creates using coffee and ink on watercolour paper);  Streetscape; Elaborate, gold leaf interiors of St. Roque Church (Igreja de São Roque). Built by the Jesuits in the 16th Century – commemorative to St Roque and his care for victims of the Black Death plague – the church was one of very few buildings to survive the 1755 earthquake.

There’s a significant amount of graffiti in Lisbon. On a half day ‘street art’ tour, we learnt about CRONO (a scheme that attracts international artists, providing the opportunity to transform neglected buildings into urban galleries) and the Urban Arts Portuguese Association. While there are specific sites for ‘free’ street art, the Government also funds and commissions work.  Hugely impressive was this project, recently initiated and completed over a ten day ‘festival’ (May 2016) in the housing estate area Bairro Padre Cruz.   The impact on the community has been overwhelmingly positive as they take ownership of such wonderful art.

Another interesting project is one that wasn’t given Government support. 2014 celebrated forty years of independence for Portugal. Street Artist, “Slap”, proposed a project titled 40 Years 40 Murals. At that time, the underground pass at Alcântara Mar station, Lisbon, was a dark and dangerous passageway for commuters, as it housed the homeless, infection and drug addicts. Slap proposed to enliven and clean-up by providing art and 24 hour lighting. When he was rejected, he obtained sponsorship for paints and lighting, enlisted other artists and they completed the project. The results were positive. In an ironic twist, the Mayor who had rejected the proposal, was looking to further his political career. In so doing, he erroneously took credit for 40 Years 40 Murals at the station. Slap responded with a large mural on the exterior wall (below) with lettering for liberty, peace, bread, democracy, housing, education and culture. The bottom right hand corner states that the project was completed without assistance from any institutions.

Some other out and about urban art, including works along the “Blue Wall” project, facilitated by the Galeria de Arte Urbana, (Gallery of Urban Art) around the walls of Lisbon’s Julio de Matos Psychiatric Hospital.

Photos: ” free wall” and a collaboration of street artists; the last three photos are from the Blue Wall. 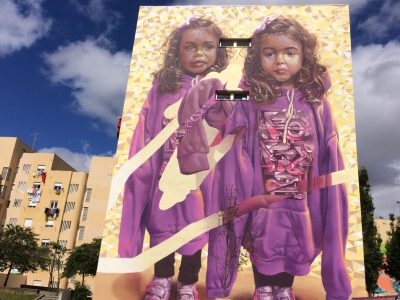