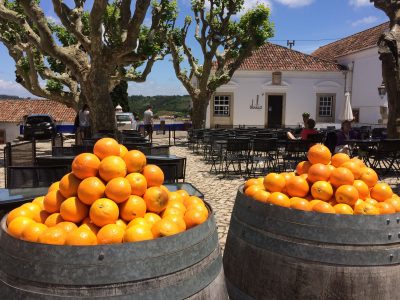 The Occasion:
A happy one indeed! Richard and Dr. Kim Proudlove’s wedding. Friends gathered from around the world for this magical three-day festival. The setting was Quinta de Sant’Ana (http://www.quintadesantana.com), an historic family home and working vineyard, 30 minutes from Lisbon. 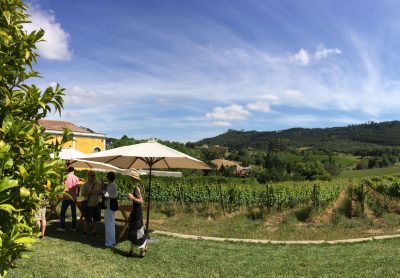 Only superlatives can be written about Richard and Kim’s wedding. The vineyard landscape, staff, food (can’t forget the cheese), wine and attention to detail of every aspect was perfect. On the wedding eve, we were treated to a wine-tasting and buffet dinner. The wedding day itself was a fairytale – the bride so beautiful and the groom his usual handsome self – from the ceremony in the vineyard, to the wedding banquet in the church, the cake and fireworks, then partying on at the downstairs disco into the wee hours.

Photos:  Waiting for the bride  –  Portuguese guitars; parasols were provided for guests; the Bride and Groom making their vows.

The next day after-party was a BBQ hog-roast overlooking the pool, where the newlyweds, family and guests continued the blissful celebrations. New friends were made as like-minded people joyfully shared the occasion. I have no doubt, that everyone deemed it ‘best wedding ever’.

Photos:  The pool party, overlooking another vineyard; those cheese platters.

Out and about Portugal:
With my neighbours Lindsay and Michael, also wedding guests, we drove surfside, then to the medieval town of Obidos, perched atop a hill, with views across more vineyards and towards the ocean. (The name Obidos comes from the Latin for citadel.) So romantic is its setting, that Obidos was a gift to Queen Isabel de Aragon, from her husband, King Dinis, back in the 13th Century.

Here you’ll see all those blue, yellow, white colours of Portugal, as you wind your way upwards through the cobbled streets. We were introduced to Ginginha, a sweet cherry brandy liqueur, which is sipped from small chocolate cups.  At the top is the Manueline style castle (Portuguese late Gothic). History tells of the castle being won back from the Moors by the first King of Portugal, Afonso Henriques, in 1148.  King Dinis remodelled the castle, which was later extensively damaged during the massive 1755 earthquake.

Photos:  Around Obidos, sampling Ginginha, view from the castle, through the bakery window.

After the wedding, I met up with friends in Lisbon to spend another few days travelling Portugal (Lisbon is a blog on its own). After four days in that lively city, we drove up to the ancient, major port city of Oporto – one man Richard, two women Emilie and me, and one Jack Russell, Cooper.  There’s lots to love about Oporto, but our first impression was of life on and around the Douro River. Simply strolling along the riverfront, dining and observing is good holiday-making. One side is lined with restaurants, then you cross the river via bridge to a strip of bodegas, markets and more restaurant more dining. (This is the city and region that originated and named Port wine.)

We cruised the river at dusk, passing under its six bridges, including Gustave Eiffel’s Dona Maria Bridge.

Photos:  Cruising, and along the River Duoro

Oporto has a history dating back to 4th Century and the Roman Times. Wandering around the city, there are beautiful examples of early architecture. Unfortunately, our stay was brief and the main art galleries were closed. That didn’t prevent us experiencing the sights, food, shopping and life in Oporto.

The last photograph on this blog has to be Rita, the most hospitable bar/restaurant manager at Quinta dos Machados, our accommodation in Barras. That’s a gin and tonic she’s offering me! 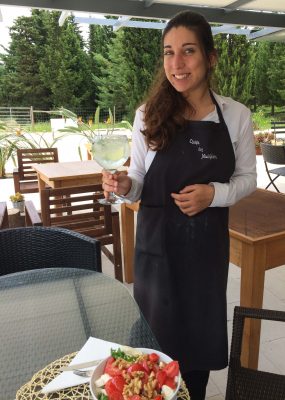 (A bit of contemporary literature trivia about Oporto: it’s the birthplace of fictional character, Harry Potter – author J. K. Rowling was living in Oporto as an English teacher when she started writing her first book.)