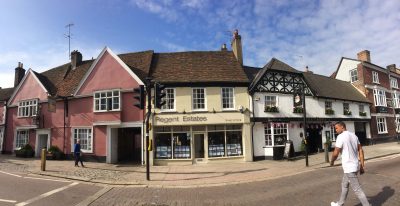 In England, I stay with my sister in the charming Tudor village of Berkhamsted, a 40 minute train ride north-west of London, located between the tunefully titled Hemel Hempstead and Tring!

Berkhamsted boasts a history that includes the crown of England being offered to William the Conquerer in 1066, following the Battle of Hastings victory. The Castle was the favourite home of “the Black Prince”, who honeymooned there with the Fair Maid of Kent. William rode from Berkhamsted to London, where he was crowned King of England at Westminster on Christmas Day.

Today, the remains of the Castle are minimal, but its past tells of “King and queens, princes and princesses, court favourites and distinguished foreign visitors” who stayed there. Further, it has a celebrity list of former residents: Thomas À Becket – Archbishop of Canterbury from 1162 until his murder in 1170 – held the lease on the Castle and spent a lot of his later years there; Geoffrey Chaucer was also a Castle resident; The hymnist and poet, William Cowper, was born in the Rectory, and Graham Greene was born at St. John’s, Chesham Road.
James Barrie often stayed in Berkhamsted. The Llewellyn Davies children who lived in Egerton House were the inspiration for Barrie’s Peter Pan…. exciting! 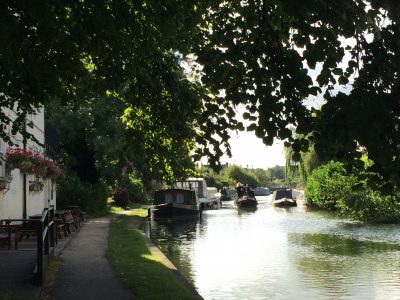 That’s a grand history for this inviting and quiet village with its popular canal and delightful High Street, both of which are dotted with pubs – I counted 14! My morning walks in “Berk-o”
commence along the Great Union Canal which opened in 1798 and, until World War II, was the principal artery of the industrial revolution linking London with the West Midlands. The canal is picturesque all year round, but this visit was early Spring, with birdlife babies arriving daily.
Early mornings, its tranquil until the day’s colourful barge traffic makes its way through the locks.

From the canal, I wander up through the village – heading towards that morning coffee. Berkhamsted village houses The Rex theatre which opened in 1938 with a production of “Heidi” starring Shirley Temple. These days, it’s a cinema with a large screen beyond the original art-deco proscenium.

Did I mention the pubs?   I highly recommend lunch or a glass of wine on a sunny day, at The Boat.

I’d never visited the Tate Britain before and instantly loved the space. From the welcoming foyer to the many spaces and diversity of works. What luck to find two exhibitions, “Painting with Light” and “Conceptual Art in Britain 1964-1979”, AND a room of large David Hockney artworks!

After those delights, we crossed The Thames to the Tate Modern for lunch “the best view over London” and more visual pleasures.

I’ve visited the Tate Modern a few times and I can’t say that I am enamoured with the vast white spaces, escalators, elevators and floor plans, as I find my way around the map and through the crowds. I like to be enticed, excited, invited in larger gallery spaces. MONA in Hobart,
Tasmania, https://www.mona.net.au is the most seductive museum/gallery I have experienced.  From arrival by boat, to delving underground via glass elevator, the steel staircases that give you glimpses to other possibilities, looking from above, down the stone walls to the cocktail bar below. Every aspect and exhibition is WOW!    Then there are the various dining experiences, indoors or outside, as well as accommodation which gives guests priority access to MONA. Sydney’s Museum of Contemporary Art on Circular Quay is another elating gallery experience (www.mca.com.au). It’s hard to surpass entering from Sydney Harbour, and dining at the roof-top restaurant.  Which takes me back to – for a marvellous view of London, lunch at the Tate Modern.

BEFORE you leave London, have a cocktail (mine’s a dry martini, please) at the very smart One Aldwych, Covent Garden www.onealdwych.com 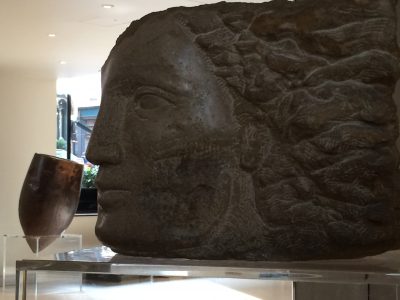