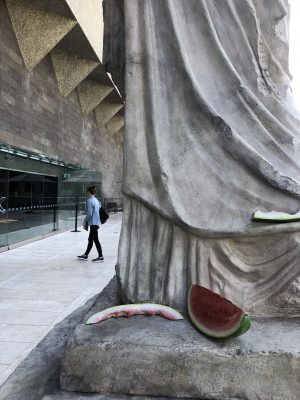 The Triennial isn’t an all-in-one visit. We went back to explore more and, on this occasion, began our adventure with the NGV’s “Follow the light” self-guided tour on Level Two.

LIGHTS, CAMERA, ACTION!
Why leave the best to last? Dive right in, with the hypnotic Salon et Lumière.  Reminiscing on the theme of 17thC Paris’ Académie des Beaux-Arts, the NGV’s Salon Gallery – with over 150 paintings and sculptures – has transmogrified into an ambience of activity as shadowy people stroll across artworks, birds swoop through landscapes. It embodies all those adjectives that shout “mesmerising, captivating, riveting.”  You have to sit, linger, overwhelmed at the extent of work in creating Salon et Lumière.  And, the music is glorious, integral to this spellbinding exhibition. I can’t rave enough. You have to see it for yourselves.

The Indonesian collective’s LED screening of Tromarama could juxtapose its historic exhibition setting, but it doesn’t. This giant digital simulation of a moving, changing marine eco-environment, features a jellyfish species that has evolved in Indonesia, a significant scientific study regarding the impact of climate change on our planet.

It’s an obvious pun, but English artist, Stuart Haygarth’s Optical (tinted) is more than eye-catching. Made from over 4,500 optical prescription lenses, Haygarth’s contemporary ‘chandelier’ is itself a play on words.  Created from re-cycled objects – a reference on consumerism – this ball of light requires closer inspection to ‘see’ its real substance.

We had to go searching for Zaha Hadid’s light. It was in a corner and we walked past, circling the gallery a couple of times until we found it. This positioning made it difficult to photographically capture the impact. I would have liked to walk around it.

The (late) Zaha Hadid was the architect of my favourite contemporary gallery, MAXXI national museum of contemporary art and architecture, in Rome. It’s a compelling building, everywhere your eye is lead to what’s above or beyond.  A must on every visit to Rome.

FABRIC FOLDS and TEXTILES feature throughout the Triennial.  Hera by Sculptor, Tony Matelli (USA) is a delicious bronze Greek Goddess, moreso because she has (hand-painted bronze) watermelons on her shoulders, and partly-eaten at her feet.  These fresh fruits leap out as ‘real’ in contrast to the greys of the sculpture and surrounding NGV garden exterior surfaces.

Pierre Mukeba was a child when his family fled the Democratic Republic of the Conga, later seeking asylum and making Adelaide home.  Mukeba’s Impartiality was another favourite on my second Triennial trip.  His vibrant work of four women, looking directly at the viewer is entrancing. Drawn with brush pen on unprimed cotton, merged with striking batik fabric, has a strength, especially the female in the middle.  I loved everything about this!

Richard Quinn’s Look 2, Ensemble is attention-grabbing as it stands alone, ‘showing off’ its pearly magnificence.  But, the lady, Joanne, who spotted it as we approached, had to share her exuberance, marvelling at every detail.  What a delight to engage with her appreciation.  British artist Quinn’s Look 2, Ensemble is a long way from those “Down at the Old Bull and Bush” pearly kings and queens I remember from theatre restaurant days in England!!

AND A WHOLE LOT MORE!
I jumped straight ‘into the frying pan’ and the fun of American Jim Shaw’s lively, surrealist style Capitol Viscera Appliances mural. The symbolism is easily recognisable in Shaw’s large work – all that debris of consumerism on Capitol Hill.

In contrast, Turkish sculpture, Guido Casaretto’s, As far as I recall / I–II is solemn. It has a sense of aged, incarcerated. Deliberately working against contemporary digital formation, Casaretto created these busts of the same man viewed from slightly different angles, making firstly in clay before casting, than hand colouring with shades of charcoal to render reality to the figures.  Mounted on one wall space, standing alone, commanding its space, it gripped me.

A single voice, film and music sound work by Susan Philipsz (born Scotland, lives in Berlin) is visually pleasing, but it’s a work with a complex explanation that I didn’t understand.  While it writes about the deconstruction of the violin sounds, I couldn’t ‘deconstruct’ the inspiration and its interpretation.  That happens sometimes, so I just stood back and enjoyed the experience.

In my first blog on the NGV’s Triennial 2020, I wrote about Refik Anadol’s Quantum Memories, but as the Grand Entrance to the exhibition, it deserves an encore. It’s thrilling and exciting.  So, I snapped another photo as morning’s natural daylight washed across it. 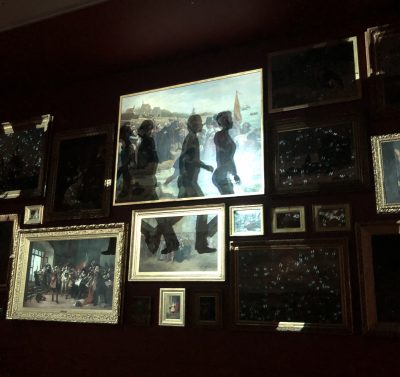