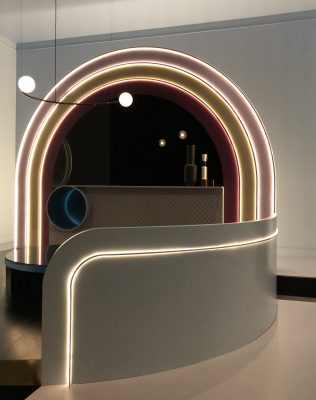 The Rigg Design Prize was established in 1994 as a triennial exhibit acknowledging contemporary design and architecture. Named after Colin Rigg, a former secretary of the Gallery’s Felton Bequest Committee, the Rigg Design Prize was originally for invited participants from Victoria, but in 2015 became a national Australia prize. This year, the Rigg Design further expanded. With a brief of “domestic living” and using double the gallery space, ten participants were each given a budget and area to shape, create and build using their team of carpenters, renderers, joiners etc. Unusually, NGV curatorial staff had no involvement in presentation, as designers determined viewing areas, some with minimal access while others are deliberately restrictive. These domestic living spaces represent the artists’ influences, interests and passions.

Danielle Brustman’s theatrical experience is evident in her Art Deco influenced Inner-Terior. It’s one of the exhibits that allows you to enter the space. I found it welcoming, I love Art Deco and could happily sit there, sipping a martini, feeling 1930’s glamorous.

Atelier is Martyn Thompson’s creation.  Formerly a fashion photographer who moved into textile design and styling, Martyn now resides in New York.   His domestic living has the feel of home and studio, a spatial ‘artwork in progress.’

My first impact of Richards Stanisich Design Studio’s Our Natural Needs in a Digital World was the textures – rustic and earthy. The environments are the basic essentials, bed and bath rooms. When it comes ‘alive’ with the vibrancy of blue light, the purpose of this installation – the changing face of digital age and blue screens – is evident.

Sibella Court’s Imaginarium is like stepping into a library and leafing through the pages of well-loved books. It’s a mini-museum, a curiosity of ‘things’, items reminiscent of a life or lives, where they’ve been, what they collected.

Golden opulence flourishes in Flack Studio’s We’ve Boundless Plains to Share. Principal, David Flack, describes himself as a ‘maximalist’ and there’s plenty of Wow factor here. But the message is to look deeper.  The installation’s title draws on the Australian national anthem – ‘We’ve golden soil and wealth for toil’ and ‘For those who’ve come across the sea, we’ve boundless plains to share’ – inviting us to see beyond the interior glamour to the world of indigenous and diversity of cultures.

Panic Room by designer David Hicks. Perhaps more than any other Rigg Design Award participants, Panic Room screams its intent. It’s a living room, of course, but with an explosion of screens and lights. It’s “real” but not welcoming, it feels impersonal with such a collision of luxury and technology.  There’s an overt blurring between private and public, the psychological invasion of social media on our lives. There’s a sense of anxiety, somebody is watching.  For me, this was the most powerful ‘domestic living’ space.

Take it Outside by Amber Road design studio is my favourite, created by the two youngest participants, sisters (both under 30), Yasmine Ghoniem and Katy Svalbe. As their names suggest, they come from a diverse cultural background: same mother, one with an Egyptian dad and the other a Latvian dad.  This is the Australian farm porch, where the family has spent countless hours talking over their lives spent in Middle East, Europe and USA. It feels like a hot night, warm breeze, chilled wine or frothy beer. There’s mixed mediums of mud and hand rendered surfaces and ‘props’ that represent Australia. I could have sat with them all night, listening to their stories.  A beautiful composition.

Arent&Pyke design studio’s Home: feast, bathe, rest is a pleasing experience, a bit like visiting a friend’s home. It addresses what we need to nurture our souls: to replenish (feast), restore (bathe) and retreat (rest). Our essential domestic needs in an elegant setting, cleverly composed.  It also features artworks. On the back wall in the photo above is an exquisite tapestry from Paris – food for my soul, indeed.

Sydney architect, Scott Westin, is currently renovating his home, an 1889 Victorian Italianate terrace called Villa Carmelina. Wunderkammer (German origin “wonder chamber”) is a place where rarities and curiosities are collected.  Scott’s home is his Wunderkammer and the installation is a sequence of six rooms, dioramas of his living spaces. This is an incredibly detailed work that includes not just the ‘show’ of each room, but a small cabinet with samples of materials, a piece of music selected for ambience. These rooms depict the colours, patterns, textures, light, art and mood. Extraordinary, and I can only imagine what Scott’s home, his castle, is like ‘in the flesh.’

And the winner of the 2018 Rigg Design Award is…

The table is the base by design studio Hecker Guthrie.  And, deservedly so! What a cleverly executed, simple concept. That’s not to suggest the design is simple, but the premise is that the table is the ‘subtle muse’ of domestic living. The central living force, described as “a domestic totem summoning familiarity”.  With two materials only, Victorian ash and terra cotta, in a minimal colour palette, they have used variations of table form to create their space.

“What Hecker Guthrie did was go back to the principals of design,” said international judge and architect, Shashi Caan (President of the International Federation of Interior Architects/Designers), “For me this one scheme simplified a purity of thinking about art and craft.”

Photos: Winner of 2018 Rigg Design Award, The Table is the Base

Julian Opie – just his name, no exhibition title.  “Here I am” at NGV International.

A British artist of popular culture, Julian Opie’s work is immensely enjoyable. Mainly figurative  – many in this exhibition were drawn around Melbourne – his style is recognisably of bold lines, minimal, but effective in depiction of body language. These individuals are anonymous but familiar: their gait, pace, dress, what they’re carrying.  In an interview about the exhibition, Julian Opie said, “All good art involves movement. Usually the movement is of the viewer’s eye as it travels around and across the artwork – cleverly guided by the artist. This is the timing and rhythm of the work that holds you there.”

Interestingly, the first thing I noticed, when observing those who came to the exhibition, was that these onlookers became part of the art and its movements.

Unmissable, as part of the Julian Opie exhibition, are the towering skyscrapers in Federation Court. Light floods over them as you wander through the NGV.  Also, while it’s in the children’s exhibition space, equally delightful for the ‘big kids’ is a draw like Julian Opie feature where you can photograph yourself, then draw and colour in a self-portrait. Such fun!

Julian Opie is on until 17 February, 2019 https://www.ngv.vic.gov.au/exhibition/julian-opie 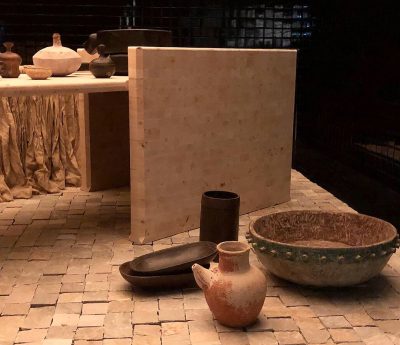