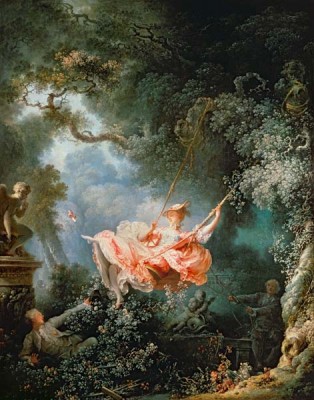 The Swing by Jean Honoré Fragonard (1767)

I recently went to see the National Theatre Live film production of Les Liaisons Dangereuses and was reminded what a delicious period of history this was. Described as ‘when vice was an art’ and courts were boring, those women used their wiles for the sauciest of gains. Love and revenge prospered. Dangerous Liaisons by Pierre Choderlos de Laclos, is set in Paris and tells of the “sexually ravenous” Marquise de Merteuil who plots to avenge her ex-lover, the Comte de Bastide. Seduction abounds (a virgin is essential). First published in four volumes from 1782, this epistolary novel is told through
a series of letters between the main characters. It is Pierre Choderlos de Laclos’ only published work, but Dangerous
Liaisons is classic literature and inspired my recent “Women In Love” exhibition.

“When one woman strikes at the heart of another, she seldom misses, and the wound is invariably fatal.”
“Dangerous Liaisons” – Pierre Choderlos de Laclos  (Pastel artwork from “Women In Love” exhibition.)

The oil on canvas painting above (“The Swing” by Jean Honoré Fragonard, 1767) is an iconic artwork of the Rococco
period. Dressed a little like a candied birthday cake (although apparently no underwear was worn beneath these pink
layers) the lass on the swing skillfully flicks her slipper towards a Greek god, creating an alluring image for her lover who lolls about in the flower bed beneath her. There’s cherubim of course – love and lust is in the air! This flirtation is
unnoticed by the elderly man pushing the swing.  The painting was commissioned by French libertine Baron de St. Julien as a portrait of his mistress, and so we have a Baron in the bushes! His brief was that the elderly gentleman was to be the naïve bishop, unwittingly participating in all this naughtiness.

If you have the chance, I recommend National Theatre Live’s “Les Liaisons Dangereuses” – very entertaining. http://ntlive.nationaltheatre.org.uk/productions/ntlout14-les-liaisons-dangereuses