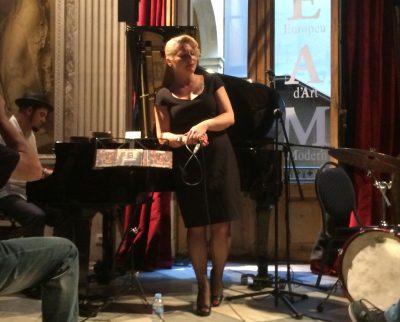 Let the songs begin,  Let the music play
Make the voices sing, Start the celebration
And cry!
Come alive, And shake the foundations from the skies
Shaking all our lives
Barcelona! Such a beautiful horizon
Barcelona! Like a jewel in the sun

These lyrics (from “Barcelona” by Freddie Mercury/Mike Moran) capture the magic of being in Barcelona. Where do you start to blog Barcelona, when it has so much of everything: high energy and beautiful people; scrumptious dining; streets with laneways, but easy to get around; music, art and the genius of Gaudi? (Art and Architecture of Barcelona will be the next blog.)

My days, as always, commenced with early morning walks, directly to the harbour. Barcelona, as I was to learn, sleeps in. Very few people are around at 7.30am, maybe some strollers and African traders setting up their wares for the day’s business. Not even a coffee shop opens before 9am. That’s a penance for this Melbourne girl!

But, good fortune, there’s La Boqueira market along La Rambla. It’s open early. Freshly squeezed fruit juice to start the day, all sorts of vegetables and a variety of salads, produce, seafood. You can dine (and wine) all day at La Boqueira if you wish.

I boarded my tourism favourite, the “On/Off Bus”, heading as far out as it would take me: The Monastery of Pedrables (from the Latin, white stones). Shhhh, so serene and calming. The Monastery was founded by Queen Elizenda de Montcada in 1327 and, to this day, is occupied by the Poor Clare Nuns (Sisters to the Franciscan Order). That stonework – stunning Catalan Gothic architecture – externally and internally.

There is so much to experience of monastic life around the cloisters and within Pedrables: the grottos, frescoes, ceramics, paintings, manuscripts, sculptures. I was quietly excited that I had made the decision to leave the city and explore.

From serene to the extreme of ornate, Palau de la Música Catalana, built early 20th Century. It’s a  show in itself, an audible “Wow!” factor. Once you’ve absorbed all the glitz (puts a smile on your face) you’ll notice that this concert venue, with a capacity of 2,200, is full of natural light which streams through decorative stain glass windows. Architecturally it typifies Catalan modernism with its shapes, curves, and extensive adornments of particularly floral and other organic themes.

And, yes, I returned in the evening for an Arte Flamenco show. Lots of straight backs, fierce faces and stamping on stage, to the thrashing of flamenco guitars.

Spontaneously, I booked myself on an out-of-town tour: Monserrat, the Monastery, followed by a wine-tasting in a 10th Century Castle. Why wouldn’t I? And it was worth it. Monserrat (serrated mountain) looms 1200 mtrs above sea-level, with the Benedictine Monastery at 700 mtrs. It’s religious history began in 880 AD when shepherd children saw a light descending from the sky around a cave in the mountains. “In the same moment the children heard angels singing and the music filled their hearts with a radiant joy.”  Their parents, and then the local vicar, also experienced this sign from God. When religious elders further explored, they found an image of the Virgin Mary and the cave became a sacred site for pilgrims.

From there to Oller Del Mas vineyard (that’s Montserrat in the background). This castle has been in the same family for 36 generations. Beautiful location where we were treated to six tapas and dessert while tasting complementary wines. http://ollerdelmas.com/en – a perfect day really.

Photos:  The vineyard; Through stone windows to the vineyard; happy me; wine tasting; view from the top of the castle.

There’s so much to love about being in Barcelona!

Photos:  Writing in my journal – a delicious, light lunch; on the beach with some new (and very good looking) friends. 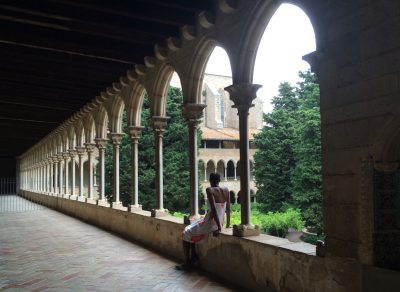 Photo: The cloisters, Monastery of Pedralbes.