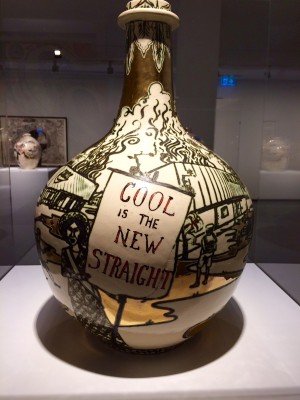 A Grayson Perry exhibition is a ‘chicken and the egg’ experience. What came first, the words or the drawings?

Perry loves words: nouns, verbs, adjectives, brands, labels – they seem intrinsic to his creative process. Words sit within his artworks, yell out, make not-so-subtle references, with wit an intelligence. In an interview, he tells you, however, that he loathes curatorial art-world language, “Who are they talking to?” He’s a straight-talker then, through such a diversity of works. The exhibition is fun. You want to get up close to see and read everything. And, it moves from serious social
comment, to mischievous, fantasy, amusing. One ceramic piece lists the names, in the order of table seating, of those who attended the night he was awarded the Turner Prize (2003).

His much-loved teddy bear, Alan Measles, features in various mediums, and there are photographs of Claire, Perry’s feminine alter-ego and transvestism whom he describes as “a central plank of my creative drive.”

There are clues in Grayson Perry’s notebooks on display. Apparently he has many, many of these. Columns of words written down. I could only guess that these pop into his brain and are immediately noted, while accompanying pictures evolve inside his head. But then, another notebook was crammed with drawings – inklings for ….. something.

Whatever the answer to this riddle, Grayson Perry’s exhibition is joyful. It’s on at Sydney’s Museum of Contemporary Art Australia until 1st May. 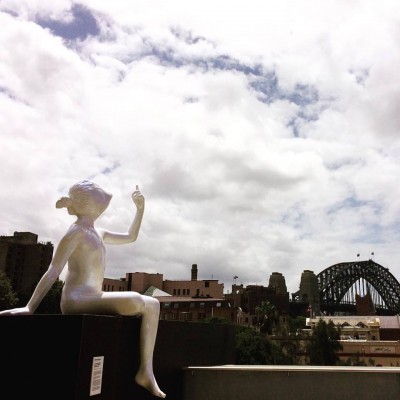