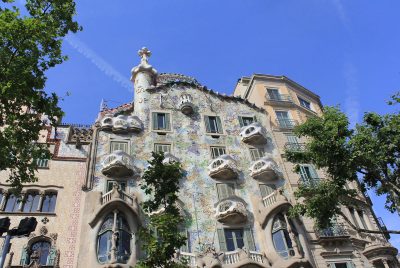 I have to start with Gaudí. “Unique” in the real sense. Ebullient, wondrous, magical buildings and features. I was keen to learn more about him as I knew nothing of Gaudí’s personal life, only that it ended when he was hit by a tram on the streets of Barcelona. Why were his extraordinary – even outrageous – designs and architectural works so readily accepted, even permitted to happen? How would I get inside his imagination?

I didn’t learn too much. Antoni Gaudí i Cornet (1852-1926) was intensely private and not much is told of his personal life and, yes, I saw the very spot where he was hit by a tram. He was unhealthy as a child, studied architecture in Barcelona and, the more success he achieved, the more he withdrew socially. I learnt, also, that his vast and innovative designs were not readily accepted and that Gaudí did, indeed, meet with resistance. But, I did get to experience Gaudí, which is akin to being “a kid in a lolly shop”. There’s so much of his modernist work (there really isn’t one Gaudí style) around Barcelona, here I’ll write about Casa Batlló.

Built between 1904-1906, Casa Batlló exudes fantastic Catalan architecture. You look up, around, inside/outside, you touch the textures and run your hands along the bannisters.

Photos:  Wood features in the large, stained glass windows, as well as the grand staircase; skylights flood with shapes and textures.

Photos:  Up on the roof, you’re surrounded by more shapes, curves, lines and, especially, coloured mosaics. 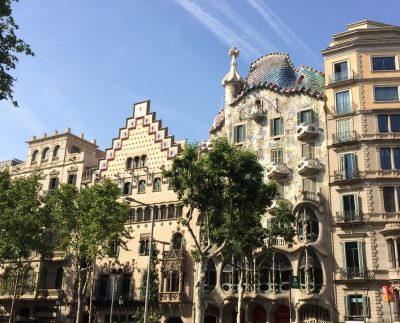 Photo: The building’s rooftop façade is a dragon-like animal’s back.

All internal features – bannisters, skylights, window frames – are ergonomically designed.   Casa Batlló is a masterpiece, guiding you from one line and space to another, exhibited through the use of light.  Gaudí was a genius! 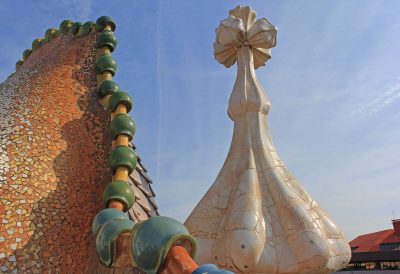