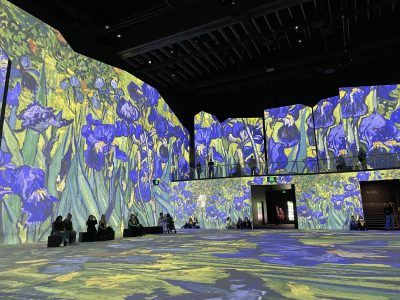 When Shakespeare wrote “All that glistens is not gold” (The Merchant of Venice) he was referring to deceptive appearances, but around Melbourne at the moment there’s loads of arty glitter and glow for all tastes.

THE LUME (VAN GOGH)
Step into this vast 3,000 sq mtr space and you are surrounded by Van Gogh’s blue irises, his starry night, text and haunting music, as his masterpieces are brought to life through projection of moving images. I took my three-year-old grandson, Hugo, who said “Wow” a lot, typical of a young mind, missing nothing.   The Lume envelops you.

Australia’s first digital gallery, The Lume is art entertainment for all ages: sit quietly against a wall and immerse; participate in a ‘draw like Van Gogh’ lesson at your own easel; enjoy wine, pastries, cheeses – there’s a menu for adults and children – at the Café Terrace 1888, and absorb this evocative experience.

The Lume is housed at MCEC (Melbourne Convention & Exhibition Centre) until October 9. From October 26, a new Impressionist exhibition The Lume “Monet & Friends” will replace Van Gogh.
THE LUME Melbourne – An Epic Adventure into Art

Photos: Immerse yourself in The Lume (Van Gogh); Champagne (mine) and croissant (Hugo’s) in the Café Terrace 1888

Photos: Draw like Van Gogh; soaring dance projections around the walls and floors.

JEWELLERY AND BODY ADORNMENT
A fascinating exhibition from the NGV’s collection, Jewellery and Body Adornment has been curated around four themes of history from antiquity to contemporary: Identity and Place; Status and Aspiration; Ceremony and Ritual; Values and Sentiment.

Jewellery and adornment, I learnt, is one of the oldest cultural art forms, significant because it has direct contact with the body. Of course, it made sense when I thought about it! Such personal representations of how you perceive yourself and want to be recognised. I should know, I’ve always enjoyed my jewellery collection whether bought for fashion, received as gifts or a travel ‘treat’. From an early age, I had a gold Christening bracelet with a heart lock, then my first gold wristwatch for my 13th birthday (now you are a teenager). In the 60s, I wore cameos on velvet ribbon chokers around my neck. I returned from (1980s) holidays in Bali, my ears dangling coloured wooden parrots and frangipanis. Venice brought spectacular Murano glass bracelets and necklaces.  I love brooches too, always adding a bit of zing to my work clothes.  Yes, I wear jewellery and it says a lot about who I am.

A parure is a 19th C matching suite of jewellery, designed for elegant women to wear all at the same time, an ornate feature of Status and Aspiration.

Dolce & Gabbana’s CD necklace was an overt statement of fashion and lifestyle, while Marjorie Schick’s 2006 work “Much ado about twenty bracelets” is bracelets within one larger-than-life bracelet. It’s colourful, clever and quirky (synthetic polymer paint on wood, bronze and steel).

The Ceremonial and Ritual theme exhibits jewellery worn for devotional purposes, displaying symbolism associated with religion, cultural identity, life and death. In India, for centuries, pilgrims making long, spiritual journeys wore small metal plaques engraved with images or text to indicate their religious or ethnic origin.  These pendants were made in workshops at temples along the pilgrimage passages.

In 1909, the UK Women’s Social and Political Union (WSPU) awarded medals for Valour in recognition of those Suffragette’s who had been imprisoned for their cause. Many had gone on hunger strike and were force fed during their incarceration, being permanently injured, and some dying. It is estimated that 100 of these medals were manufactured and awarded.

Mourning jewellery commemorates the death of a loved one, a public symbol of grief. Though not ritualistic Peter Tully’s 1977 “Love me Tender” necklace commemorates Elvis Presley, an ornamental depiction of the adulation given to Rock/Pop stars.

Wedgewood’s ceramic medallion was produced in 1787 by British Potter, Josiah Wedgwood, as a seal for the Society for the Abolition of the Slave Trade. Depicting a kneeling black man in chains with his hands raised, it is inscribed “Am I not a man and a brother?”.  Wedgewood made 500 of these for distribution (not sold for profit). John R Oldfield’s (1998) Popular Politics and British Anti-slavery: The Mobilisation of Public Opinion Against the Slave Trade, 1787-1807, refers to the medallion as “the most recognizable piece of antislavery paraphernalia the movement ever produced.” 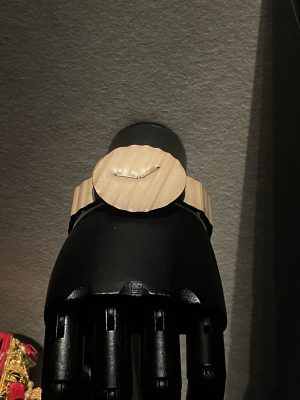 I have a favourite piece of jewellery in the exhibition: David Bielanger’s witty abstraction of a wristwatch. Seemingly cardboard with staples as hands, the wristwatch is made from silver and white gold. This adroit work turns Shakespeare’s writing on its head as all that glistens looks like cardboard, but could be gold!!

WORD MADE FLESH (Paul Yore)
Paul Yore’s work is deliciously excessive, it glitters, it sparkles, its queer… and so much more!

Word Made Flesh at ACCA (Australian Centre for Contemporary Art) is an assembling of the artist’s breadth of work over the past 15 years. Born in Melbourne, Yore studied painting, archaeology and anthropology at Monash University. He works in collage, appliqué, mixed media, needlework. One ACCA gallery space is packed with a vibrant, wonderland of sculptural installation.

Photos: themes in messaging
Word Made Flesh is at ACCA until 20 November 2022  https://acca.melbourne/exhibition/paul-yore-word-made-flesh/ 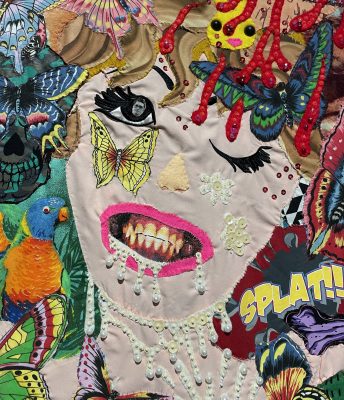