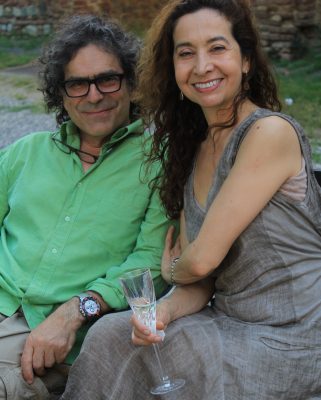 Introducing Prof. Yves Laroque and Mónica Marquez, proprietors of Walk The Arts (walkthearts.com). I’m one of eight fortunate people – three French Canadians, one from Vancouver and four Australians – who ‘signed up’ for their Tuscany art history/plein air workshop in June this year.

I’ve always gravitated towards people with passion. Yves and Mónica have ‘passion’ in bucket loads: for life and landscape, history/art history, fresh produce for cooking, and for each other. I was initially attracted to the title of their business. WALKING and THE ARTS – a perfect combination! And that was just the beginning. The prospectus for Tuscany looked ‘made to order’, the experience was more than I could have imagined.

Where to start? Perhaps with how I embrace each day – my morning walks. The property where we stayed, Tenuta La Fratta (http://www.tenutalafratta.it) in Sinalunga, had a boundary that extended several kilometers. Before anyone else had risen, I would step out in the daybreak light, propelled with happiness to exist in Tuscany. Here’s a mere tease of my morning walks.

And, there were farm animals whom I said “hi” to each morning: goats and their kids, pigs (12 huge piglets), geese, chickens, cows…and my favourite, the donkey. There I was in this Land of the Renaissance, and the donkey – a symbol of loyalty in Renaissance art – greeted me each morning. I would grab an apple on my way out, eat it, and give the core to this gorgeous beast.

The Schedule: it ran with military precision. Whether a lecture, a lesson in colour mixing, or being chauffeured around by Yves – starting time was “it”. (Loved that!). Yves “I am a man…just a man” would take us out around La Fratta or to countryside surrounding Pienza, Cortona, Multepulciano. We’d set up easels and Yves would drift amongst us, giving instructions, pointing, correcting….always with so much verve.

Photos above: Helen sets up; Yves striding the landscape; where to paint?; me –  colour mixing my palette; working “the browns” of Montepulciano; from Pienza; arms folded, Yves critiques my artwork; Jennifer and Lucie painting at La Fratta.

After a few hours of plein air painting, Yves would drive us into the villages, instructing us on the architectural history, noting key aspects. We’d wander the streets and the shops, then find a taverna to sample the local wine.

Photos above: Around the streets of  Pienza, Cortona and Moltepulcliano; Jennifer, Lyn, Yves and Francine on the steps of Teatro Signorelli, Cortona.

THE HIGHLIGHTS: There were many, but right up there at the top of the list has to be…….
Mónica’s cooking. The kitchen is undoubtedly her ‘place of business’ as she lovingly plans each meal and takes such pride in presentation. (She and Yves are currently working on publishing their own cooking book.) Our hosts join us at the dining table and the wine is limitless. I was privileged to be permitted into Mónica’s inner sanctum on one occasion when we shopped and prepared the evening’s meal together. This was an unprecedented honour – lucky me!

Photos above: Happiness is…..Mónica and Yves in HER kitchen; pasta; Bon Appetit: Mónica and me.

Biblioteca Medicea Laurenziana.  Kerry (from Vancouver) and I chanced upon this library, situated alongside Santa Croce church in Florence. Home to what is described as “the most important and prestigious collection of antique books in Italy” and “the most lasting cultural inheritance which the Medici family has passed down to the attention, care and admiration of posterity.” Designed by Michelangelo, decoration of the library coincided with its actual construction (the ceiling dates to 1549-1550, the flooring from 1549-1554, the windows from 1558-1568). For this reason, it is considered one of the most unified works of the High Renaissance in Florence.

The entrance up a rather dramatic staircase and into a vestibule, takes you to the long hall reading-room. We were mesmerised by the sacrosanct sense of being there. Indexes at the end of each reading pew indicate what manuscripts would have been stored in those rows. There are rooms of glass-cased manuscripts and a Rotunda – an addition to the original library in the first half of 19thC to house a book collection, once belonging to Florentine scholar Angelo Maria D’Elci, and bequeathed to the Laurenziania. The books in the Rotunda date 15th-18thC and contain many incunabula (books printed in the second half of the 15thC).

The Bibilioteca was a “wow factor” experience for Kerry and me.

“Firenze” by Yves. I’ve been to Florence before, but seeing it through the eyes of Art Historian, Prof. Laroque, was engaging and educational, as Yves strutted the streets, pointing up at this, directing our attention to that. In fact, two highlights in one!  In the Uffizi, Yves enthusiastically articulated his lectures and all things Renaissance.

Photos above: Yves talking Firenze; look up; Instruction in the Uffizi; about Uccello; a couple of interior photos – there are many!

While the rest of our group wandered Florence, Yves took me into Santa Maria Novella – oh, what a beauty she is. Designed by two Dominican friars, Fra Sisto Fiorentino and Fra Ristoro da Campi, building commenced in mid-13th century (about 1246), and was finished about 1360. Santa Maria Novella was consecrated in 1420.

There are so many….but here’s a couple more sights around Florence.

Assisi. We spent half a day there. Not enough. So much to explore in Assisi and what a location! Yves took us to the Basilica of Saint Francis of Assisi, with its upper and lower churches, cloisters and outbuildings. There’s a ‘silenzi’ rule, so we huddled together as Yves whispered about the beautiful frescos.

Photos above: Towards the Basilica of St Francis of Assisi; the cloisters; Assisi town centre; down to ..?; a fresco.

As our last travelling day, we were then given ‘time out’ to enjoy ourselves, a sort of schoolies for grown-up students. Assisi is Medieval, undulating, winding steep streets, interesting shops, reasons to keep looking. The architecture of Assisi has Umbrian and Roman foundations, large walls and eight gateways. The town centre was built over a Roman forum. After strolling, a few of us met up for lunch – breathtaking views of the sloping foothills. Definitely one of those “stop the world now” moments. 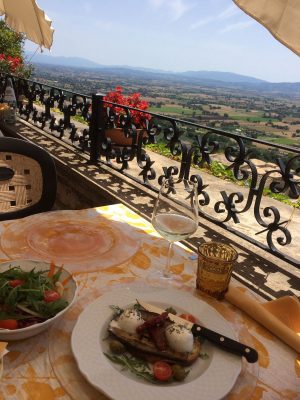 Photo:   Bruschetta…lunch anyone? Isn’t it fabulous?

It was hot. More wandering, shopping, melting gelato, and then I moseyed into the Basilica di S.Chiara (Saint Clare of Assisi who founded the Order of Poor Ladies). Clare was born into an influential family. There’s much to learn about her life, upbringing and how Clare heard Francis preaching when she was a teenager, turned her back on her family’s nobility, to follow a life dedicated to God, prayer and the teachings of Francis. In founding the Poor Ladies order, Clare was the first woman to write the life rules for religious women.

Photos above: One of the gateways in Assisi; crucifix in Basilica di S.Chiara; elderly nun collecting offerings; Silenzio also in the Basilica de S.Chiara.
I must return to Assisi!

I guess I can’t finish this blog without showing the fruits of Yves’ labours.  Here’s the plein air artworks I completed during my Ten Days in Tuscany. Titled “Colours of Tuscany” series, two have sold, and I’ve yet to exhibit the others.

Yves and Mónica run a program of workshops around Europe and other parts. Have a look at their website and contact them. I know you’ll be welcomed! 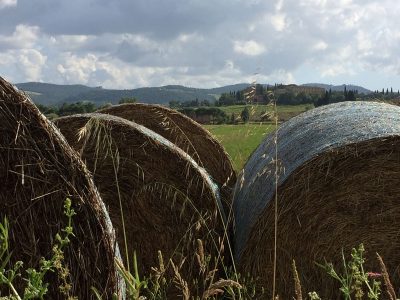